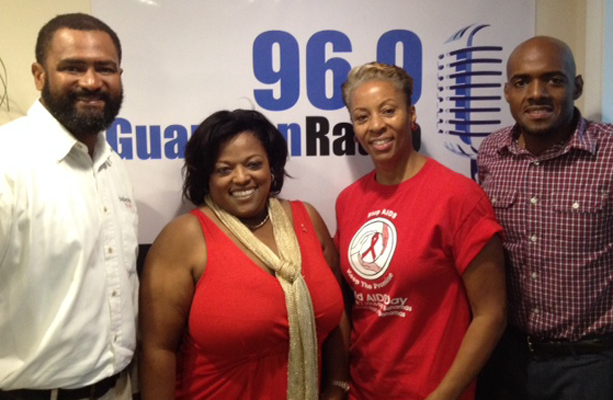 We discuss the problems with domestic violence and abuse in the country, and the challenges dealing with a cultural mindset that almost seems to support aggressively physical behaviors from not only men, but also women. To bring awareness and spark debate about these issues, Zonta International is promoting its worldwide “Zonta Says No to Domestic Violence” initiative. Zonta’s Bahamas Chapters are also part of the campaign, which includes “16 Days of Activism”. A series of events is planned, including international “Zonta Says No Day” on November 25. Kenris Longley and Cherrylee Pinder tell us that on that date everyone is being encouraged to wear orange clothing and “Zonta Says No” ribbons and wristbands. For more information, email zonta@gmail.com.

“Believe in ZERO” is the global slogan for the fight against HIV/AIDS. The aim is for “zero new HIV infections, zero discrimination, zero AIDS related deaths”. The Bahamas AIDS Foundation is at the forefront of the fight here in this country. President Lady Camille Barnett (pictured 2nd from right) updates us on the work of the Foundation, and the ongoing struggles with HIV/AIDS awareness and education. Aramie Ford gives us details on the Foundation’s main annual fundraiser, the Red Ribbon Ball – now in its 20th year. The black-tie event is slated for November 16 at 7pm at the Grand Ballroom at Atlantis. Tickets $250.

And “In The News”, Prime Minister Perry Christie says the government may consider delaying the July 2014 implementation of Value-Added Tax, if it’s not satisfied that businesses are ready and the public properly educated. Mr. Christie also suggested that VAT has come about because of the defeat of the Gambling Referendum back in January. These comments spark a lot of discussion.
Listeners also have a lot to say about the PM’s comments about Gaming Board Chairman Dr. Andre Rollins, who this week was highly critical of the govt.’s proposed Gaming Bill. The prime minister says Rollins has “placed himself in a difficult position” because “he would have to play a key role in helping to administer the bill”. We get views on what this means for Rollins’ political future.
Plus, the latest on the widespread threats of industrial action from various unions throughout the country.