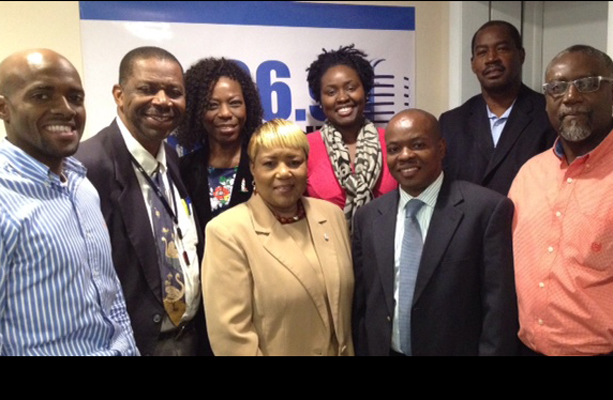 Our postmortem on the 2013 Atlantic Hurricane Season: after being battered during back-to-back active years, The Bahamas, thankfully, had a respite from hurricanes this year. But it was still a busy time for NEMA (National Emergency Management Agency), as various weather systems brought record rainfall and flooding to New Providence and other islands in the country. And there were other tragedies, including tornadoes and deadly fires. Captain Stephen Russell (pictured, 2nd from right) gives us an update on NEMA’s operations this past year.
We also hear from some of the Agency’s partners: (pictured from l to r) Bradley King, Ministry of Works; Lindsay Thompson, Bahamas Information Services; Caroline Tunrquest, Bahamas Red Cross; Dr. Anthone Ward, Public Hospitals Authority; (Capt. Russell); and Jeffrey Simmons, Bahamas Meteorology Department.

“In The News”, we discuss the government’s plan to invest $30 million in expanding social safety net programs to offset the anticipated harmful effects of Value-Added Tax on the nation’s poor.
We also react to the latest IDB report that suggests VAT will lead to higher growth, lower debt, lower unemployment, and lower inflation, but only after an “initial surge” in these areas in the first year. The IDB study supports claims that VAT will lead to an additional 3-4% increase in the cost of living in the country.
Meanwhile, the Central Bank says the deficit shrunk 46 percent in the first quarter of the 2013/2014 fiscal year. Higher revenue collection and lower expenditure is credited with the turnaround.