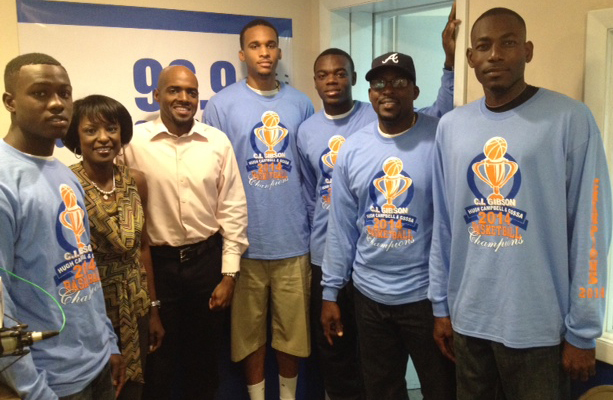 It’s celebration day for C.I. Gibson Senior High! A float parade throughout New Providence is planned as part of the festivities to mark the Rattlers’ victory in the 2014 Hugh Campbell Basketball Championship. Coach Kevin Johnson tells us about the hard-fought win, and how the team overcame a tough 2013 to claim the school’s 5th Hugh Campbell title and first since 2006. Three of the 12th grade players also tell us about the challenges with being on the team and maintaining their 3.0 grade averages, and they discuss their plans after graduation this summer. Pictured: Rattler team member Wilton Johnson; Guest host Pamela Musgrove; Dwight; Rattler Shamir Rolle; Rattler Quincy Poitier; Coach Kevin Johnson, and Asst. Coach Mark Hanna.

“In The News”, it’s Round 2 in the war of words between Foreign Affairs Minister Fred Mitchell, and Bah. Faith Ministries Pastor Dr. Myles Munroe. Both men addressed separate church congregations Sunday, reinforcing their positions on LGBT rights. Munroe once again called on the government not to sign on to any agreements that go against the moral standings of the country, and Mitchell said he will continue to stand for the rights of all people, despite the “character assassination” launched against him.